I watched a video on YouTube by Eric Thomas, the hip-hop preacher.

He said something unusual. To paraphrase, he said:

“You matter. I’m saying that because some of you may never have heard that.”

It’s strange that people don’t say that more often. I know people like to say it with actions, but there is something powerful about hearing that raw phrase, ‘You matter’. There are two things that strike me about this, the power of the obvious and the power of the hidden.

This is something I have learned. People avoid being direct and obvious, so playing a character that is obvious is very unusual and almost always very funny or very touching. Usually it can be both.

Basil Fawlty in Fawlty Towers. His reaction to everything is to freak out, you know he is going to freak out and yet it’s still funny. Him trying to hide things from Sybil is also funny because you know that she will find out. I think that series plays the with tension of hiding and revealing excellently. His well-known interaction with German guests is a great example of the power of the obvious. He says exactly what he’s doesn’t want to say and winds himself up into a ridiculous frenzy. Imagine that scene where he says nothing and maybe just made jokes outside their earshot. Absolutely no drama. 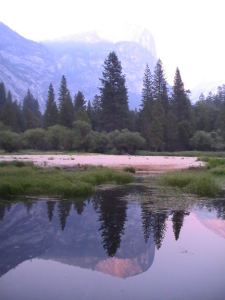 It’s hard in the beginning to play characters that hide what they want, because often people don’t pick up on it. I think you need to work with other improvisers for a while to learn how to read each other. It’s not impossible though, its very close to how we live. Hiding what we want from ourselves or others.

You could try this experiment, stand in front of a mirror and say to yourself “You matter.” Then see how you feel about that. Is it weird and uncomfortable? Is that because you don’t often tell yourself that you matter?

If you aren’t positively acknowledging yourself, then what are the hidden things you say to yourself instead?

Watching random videos on Youtube is a great way to find new inspirations. Why was I listening to a hip-hop preacher? That doesn’t matter. What matters is taking something fascinating away from it.

More importantly: You matter. Just because you might not say that to yourself or hear it a lot doesn’t make it less true. Especially in a creative field like improvising drama and comedy, your voice matters.

What do you think? Cancel reply

This website is, in an important but slightly untrue sense, as much yours as it is ours. Help us make it better.